Aquazzura is making Italy proud and the fashion world obsessed

Whether you follow footwear trends or not, you’ve probably noticed the Italian standout in luxury footwear. Aquazzura is the Italian footwear label on every blogger’s feet, on every fashion editor’s wish list and always out of stock. If we’re being completely honest, we haven’t met an Aquazzura shoe we haven’t fallen in love with – they’re that amazing and here for the long haul.

Due to the brands popularity, other designers have taken notice. It was earlier this year when the brand fell victim to copyright infringement by another well known shoe and handbag label. We’ll call it flattery, and if we were to ask the late Coco Chanel, she would say, “if you’re original, be ready to be copied.” 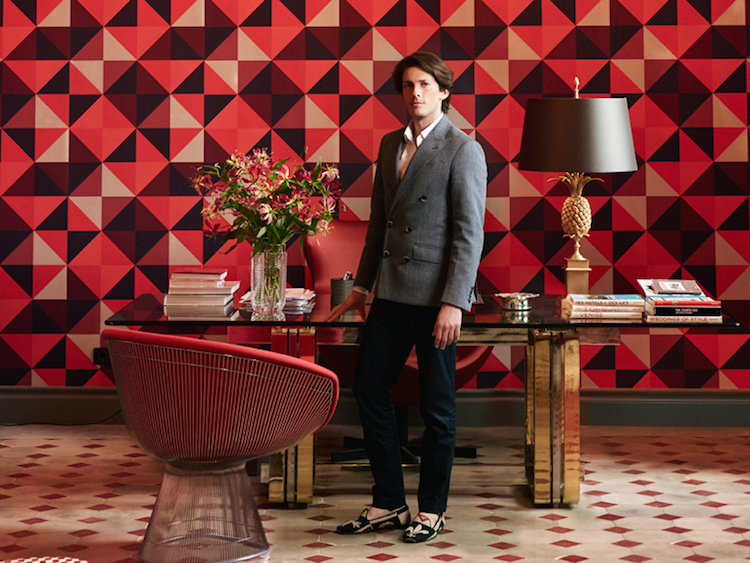 At 29 years young, the Colombia born, London and Miami raised and now Florence-based designer is the creative behind Aquazzura. At nineteen, Osorio threw himself into the industry, earning a decade of experience learning his trade at Salvatore Ferragamo, Sigerson Morrison and Roberto Cavalli until he decided to launch his own luxury footwear label, Aquazzura in 2011. The risk was well worth it, as today, the designer is racking in accolades such as the Elle Accessories Designer of the Year Award.

After a year filled with over 12 weddings, he noticed the women taking their shoes off before hitting the dance floor. He couldn’t wrap his mind around the lack of selection for sassy, comfortable footwear for women. From those experiences he knew there was an opportunity to create stylish yet wearable footwear for women of all ages. Flash forward to today, Osario has seemed to create the unthinkable – he’s created shoes that are light in weight, sky high and comfortable thanks to a cushioned in-step.

Aquazzura Headquarters: Made in Italy 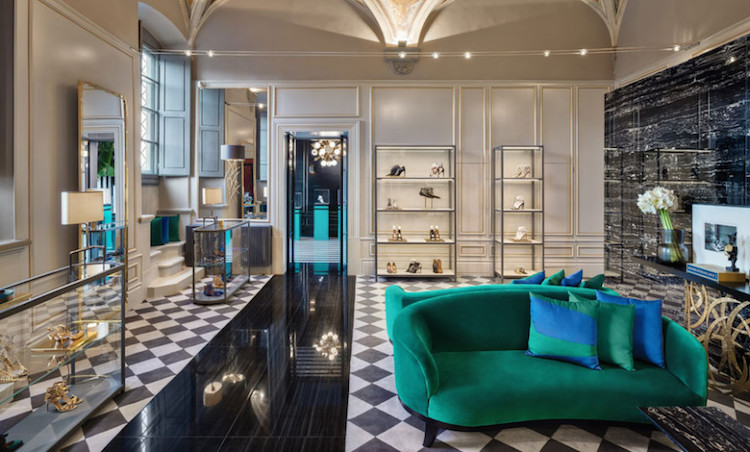 Aquazzura headquarters are in Florence, Italy in the Palazzo Corsini which is a beautiful palace on the river near Ponte Vecchio. Palazzo Corsini used to be the old Medici apartments from the 16th century, and all the original vaulted, frescoed ceilings and moulding are still in tact. Everything about the Aquazzura brand is not only made in Italy, but made in Tuscany. Many styles have hand applied pieces and can take up to thirty hours to create a single pair.

The Meaning Behind the Name Aquazzura 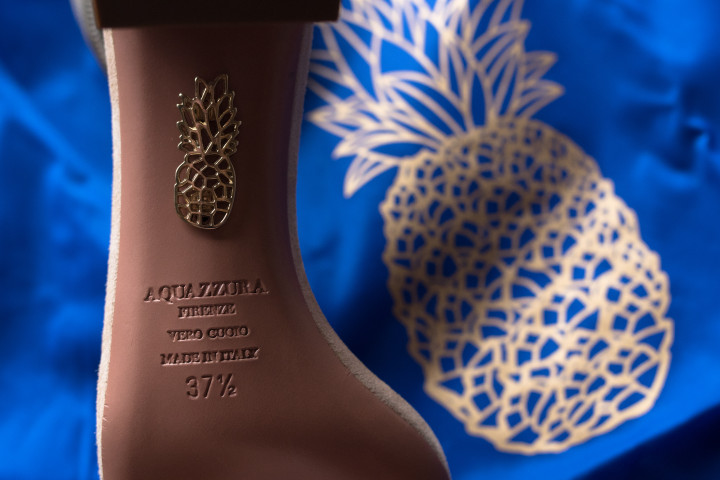 Osorio wanted the name to be reminiscent of his holidays in Capri, the water, positivity and the dolce vita. His favorite color is blue, and aquazzura means ‘blue water’ in Italian so it was only suiting to name his label this.

Another interesting Italian secret is engrained in Aquazzura’s signature motif. It’s a little gold 3D pineapple at the sole of every shoe and is inspired by the Southern Italian tradition of placing a pineapple in the doorway of a house to encourage prosperity. Osorio was so taken by the gesture when he arrived to Italy that he made it his insignia.

“I like the idea of sending my Aquazurra girls out with a lucky charm under their feet.” – Edgardo Osorio

Osorio believes the best way to dress is from your feet up. Shoes are very emotional. If you’re feeling empowered and sexy, notice, you’ll most likely gravitate towards your heels. But if you know you have a crazy, busy schedule for the day, you might notice you’re reaching for your flats.

Osorio definitely plays with the cool girls. The young designer launched a collaboration with fashion icon, and long time friend, Olivia Palermo and most recently, teamed up with model, Poppy Delevingne, for a romantic and whimsical eight style collection. 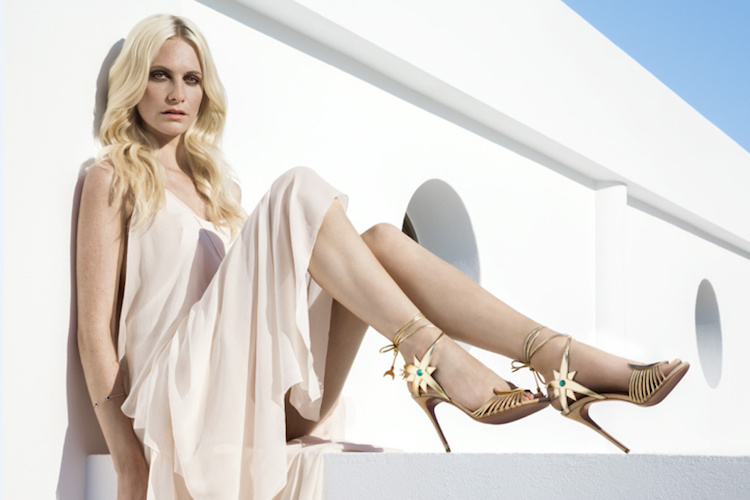 Other celebrities wearing Aquazzura include:

Salvatore Ferragamo fans are also joining the Aquazzura fan club thanks to a collaboration between the two brands this year. Osario added his personal flair by mixing unexpected materials and playful details, such as bows, lace and polka dots, in a range of 11 Ferragamo styles. 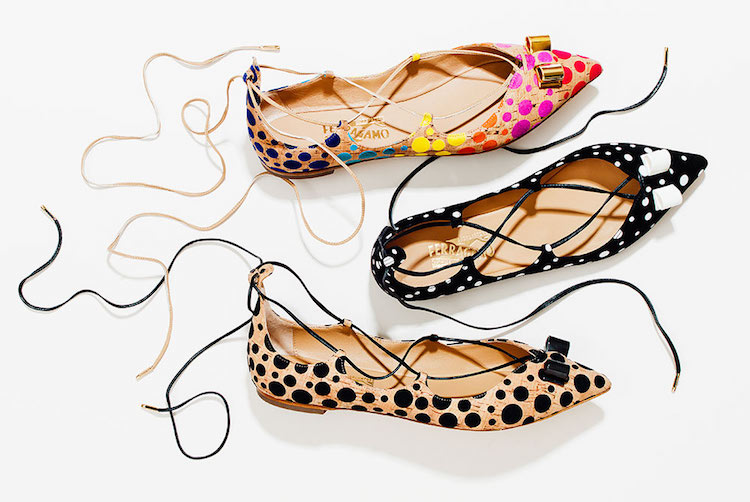 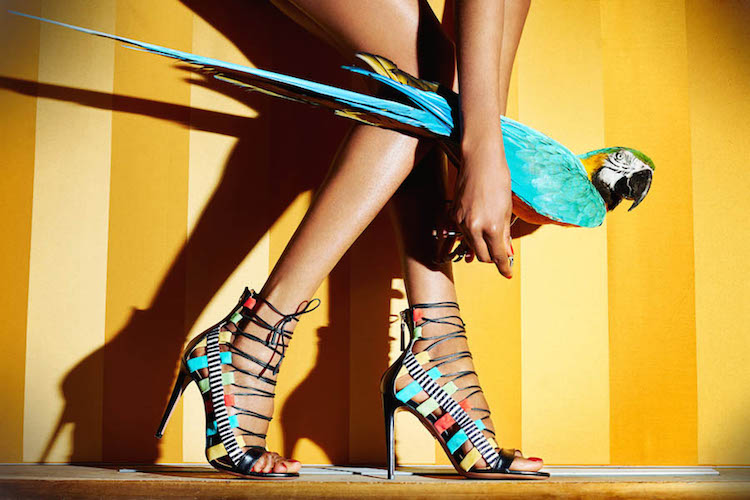 The resort and spring/summer collections started with the idea of a pop jungle. According to Osorio, the inspiration was a melting pot of Pharrell Williams meets Loulou de La Falaise. Loulou de La Falaise was also the muse of designer Saint Laurent and was this chic, bohemian, French woman who was always jet-setting between Marrakech, Paris and India. She was a mix of glamour and bohemian. So in turn, the collection incorporates a lot of tassels, creamy suedes and beautiful jewel-toned colors for a very bohemian-chic vibe. Tying in the Pharrell vibe, Osorio decided to also mix modern graphics and bright colors. Based on the hype, sold out styles and press, we’d say the fusion of these two worlds worked very well. 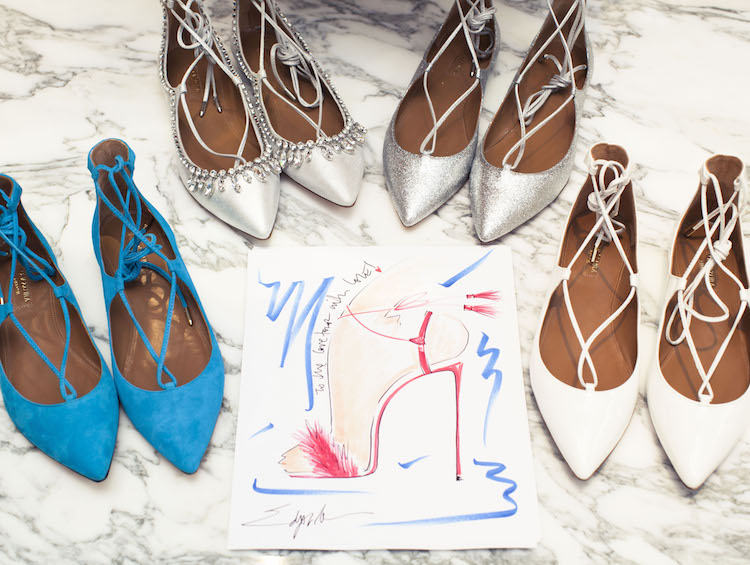 Today, Aquazzura is sold in 45 countries, but as mentioned earlier, it’s hard to keep in stock. Below are the most popular styles as described by Osario himself.

“I wanted to make shoes that girls could walk in and dance in.” – Edgardo Osorio

What’s Next for Aquazzura

Aquazzura bags and collaborations with even more artists is coming in the very near future.

You deserve a new pair of shoes! Shop your favorite Aquazzura styles before they sell out!

Italist Review: What Our Customers Are Saying

Duty Free Shopping Just Got Better for the United States