Who was Yves Saint Laurent, how do you pronounce his name, and what were his most iconic looks?

Renowned for his chic androgynous designs, Yves Saint Laurent was one of the most influential designers of the 20th century. He revolutionized the fashion industry, liberating women and popularizing ready-to-wear. 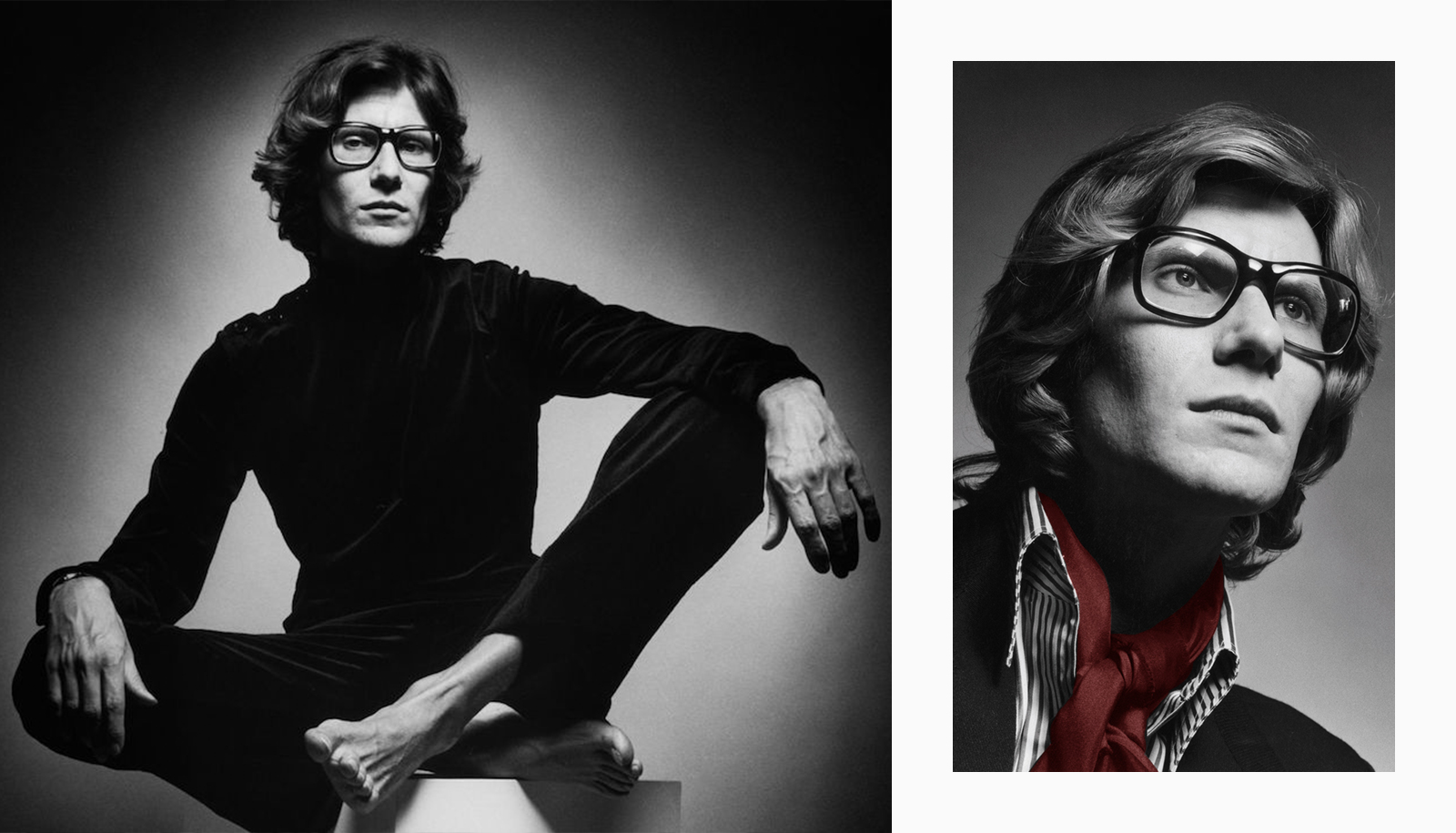 How to pronounce Yves Saint Laurent

Wondering how to pronounce the designer and brand’s name correctly? Yves Saint Laurent is pronounced EVE SAN-LAW-ROHN. The letter “t” in both “Saint” and “Laurent” is silent. 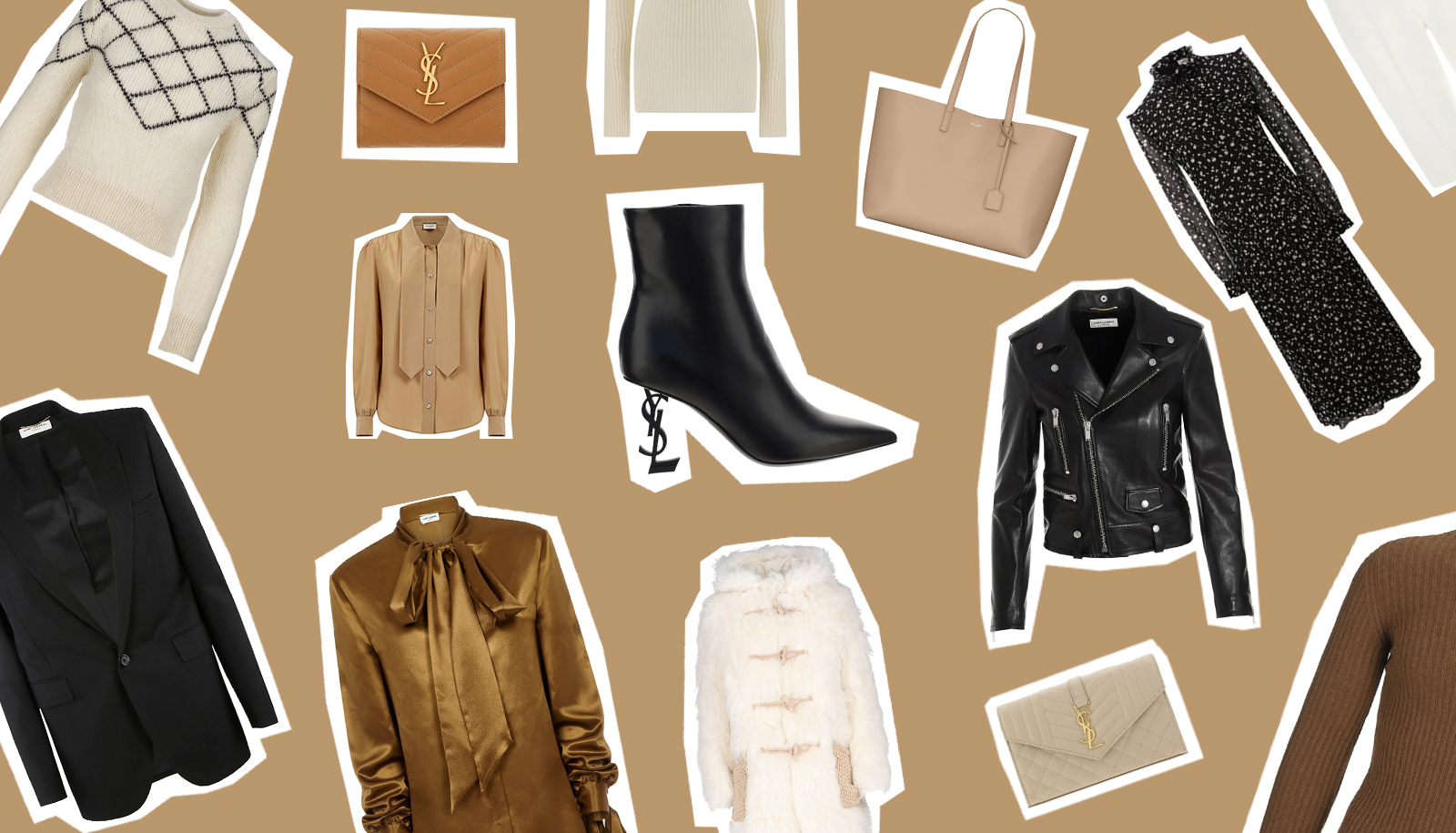 While this change was controversial, Slimane intended to take the brand back to its origins, restoring it to its essence: the label’s first ready-to-wear collection was named Saint Laurent Rive Gauche (Rive Gauche being the left bank of Paris, where the designer opened his first boutique). Back then, the name Yves Saint Laurent was only used for the couture collection.

“Saint Laurent Paris” is pronounced SAN-LAW-ROHN PAH-REE (we like to pronounce Paris the French way).

Saint Laurent’s is the story of a young prodigy. Yves Henri Donat Mathieu Saint Laurent, commonly known as Yves Saint Laurent, was born in 1936 in Oran, Algeria, into a French family. He was a shy, reserved child with a fierce passion for fashion, and an indisputable talent: he grew up designing clothes for his sisters using paper dolls as models, and dreamed of one day opening a fashion house in Paris. 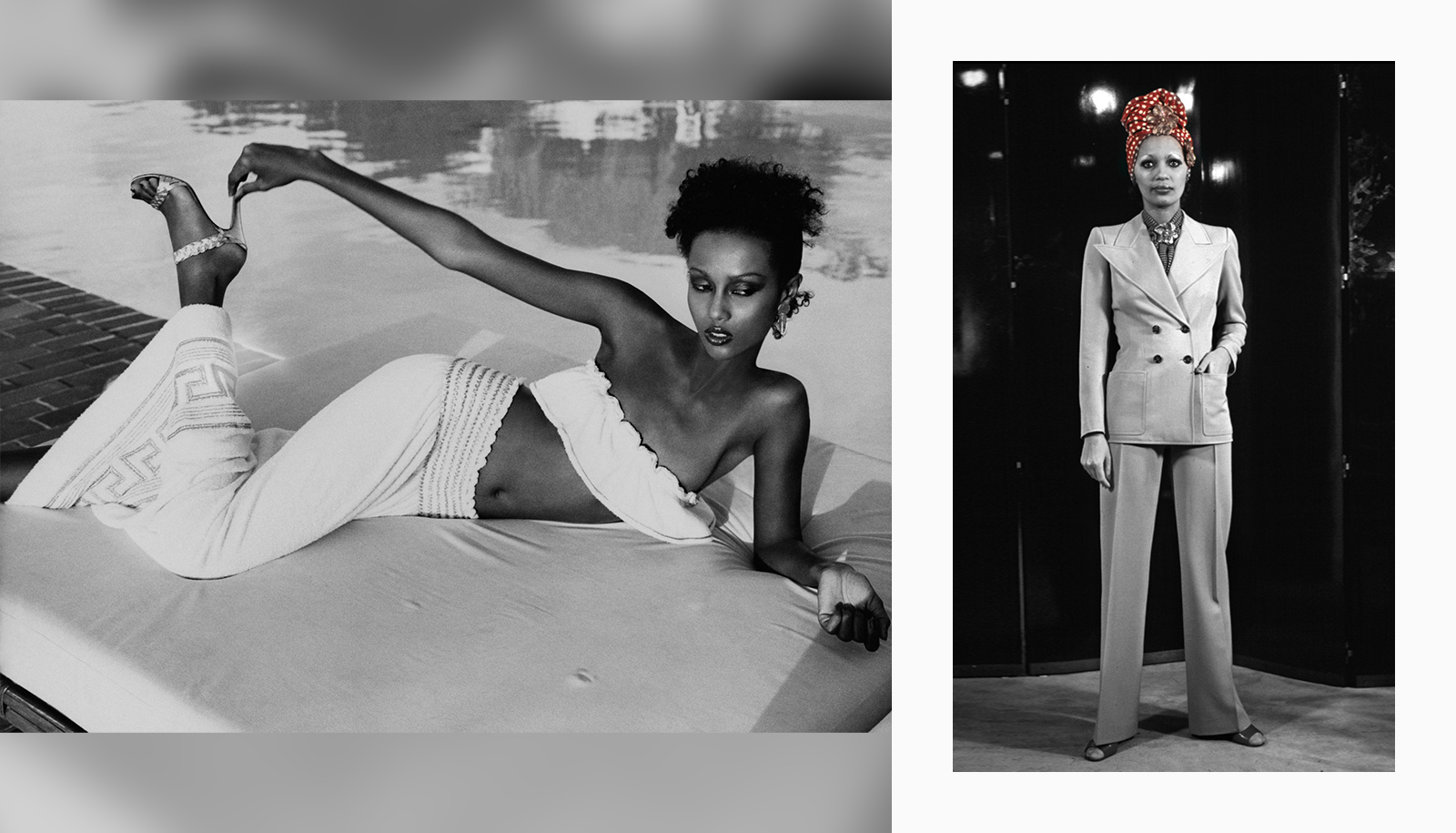 At 17, after winning the International Wool Secretariat prize (known today as the Woolmark Prize) in the dress category, Saint Laurent did move to Paris. A young Karl Lagerfeld had also entered the competition, and came first in the coat category.

Once in Paris, Saint Laurent attended the Chambre Syndicale de la Haute Couture, and his creations were noticed by none other than Christian Dior—he started working for the designer as an intern, and was eventually appointed head designer of the label after Dior’s sudden death in 1957. 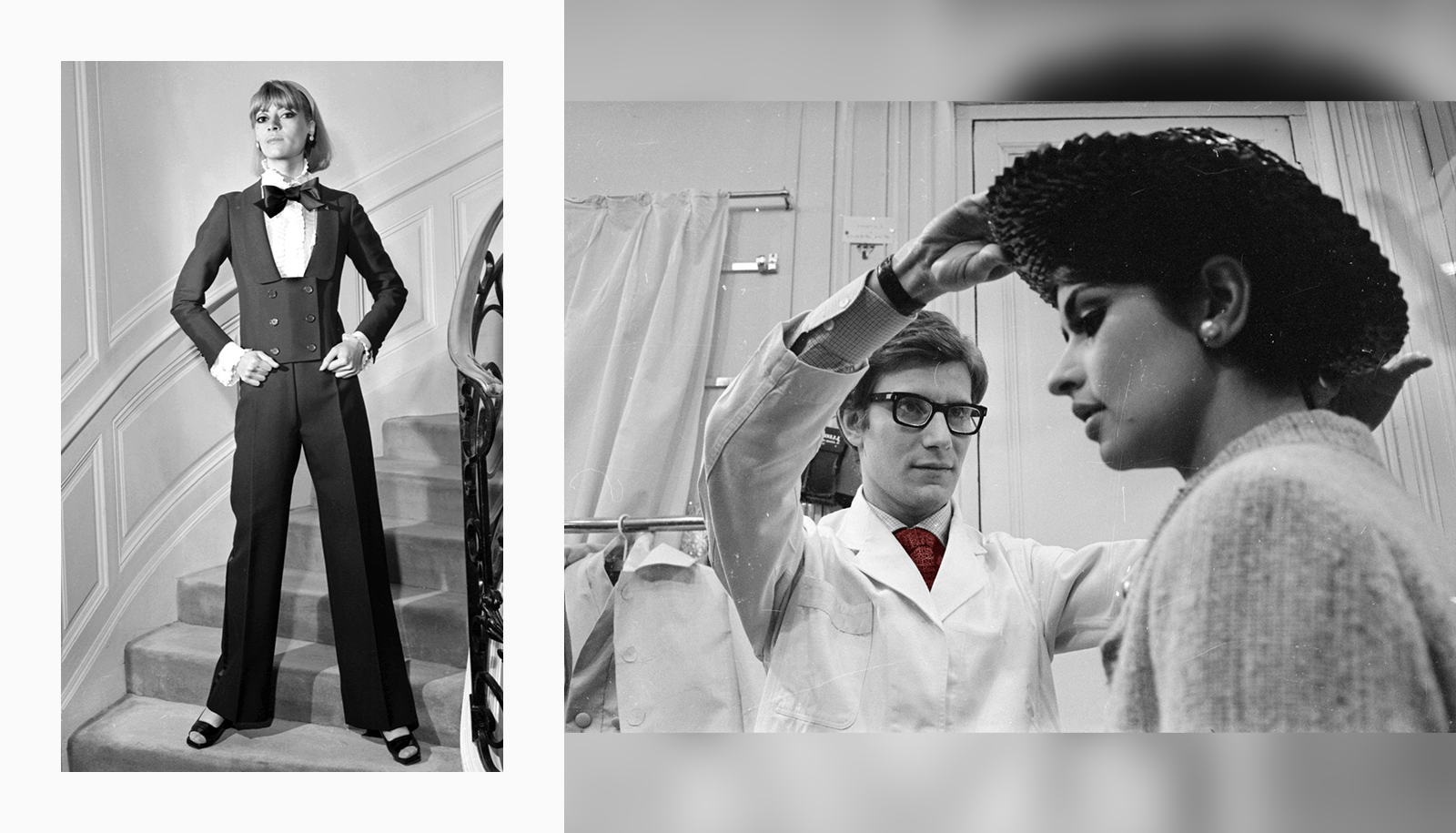 In 1961, Saint Laurent saw his childhood dream come true: abruptly dismissed from Dior because of a nervous breakdown, he launched his eponymous label with his partner, Pierre Bergé. Saint Laurent was young but experienced, and his creations were praised by the media and fashion connoisseurs worldwide.

Bold, innovative, and subversive, Saint Laurent blurred the lines between masculinity and femininity. As he told The Observer in 1977, he wanted women “to have the same basic wardrobe as a man,” and strongly believed functionality and style could go hand in hand. His goal? To empower women, celebrating sexual freedom and individuality.

“Chanel freed women, and I empowered them.” – Yves Saint Laurent 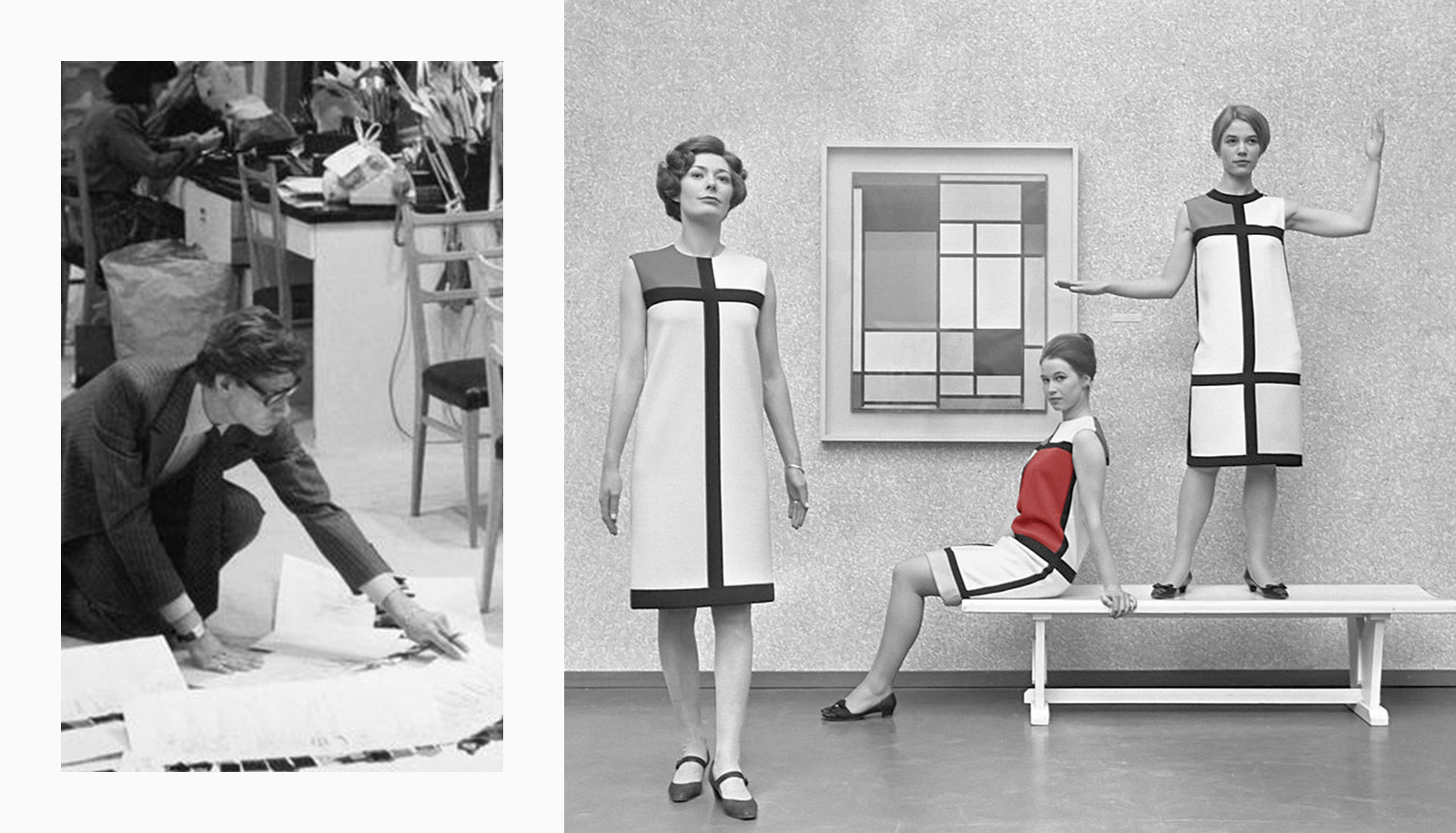 The Mondrian shift: As an homage to Dutch abstract painter Piet Mondrian, in 1965 Saint Laurent designed six woolen cocktail dresses that brought art and fashion together. The plain shift dress, revived in the 1960s with the rise of second-wave feminism, was a perfect canvas for the designer to play with intersecting black lines and vivid primary colors.

Saint Laurent’s simple yet innovative design was featured on the cover of French Vogue in September 1965. The Mondrian shift was so successful that cheap copies started to appear everywhere. 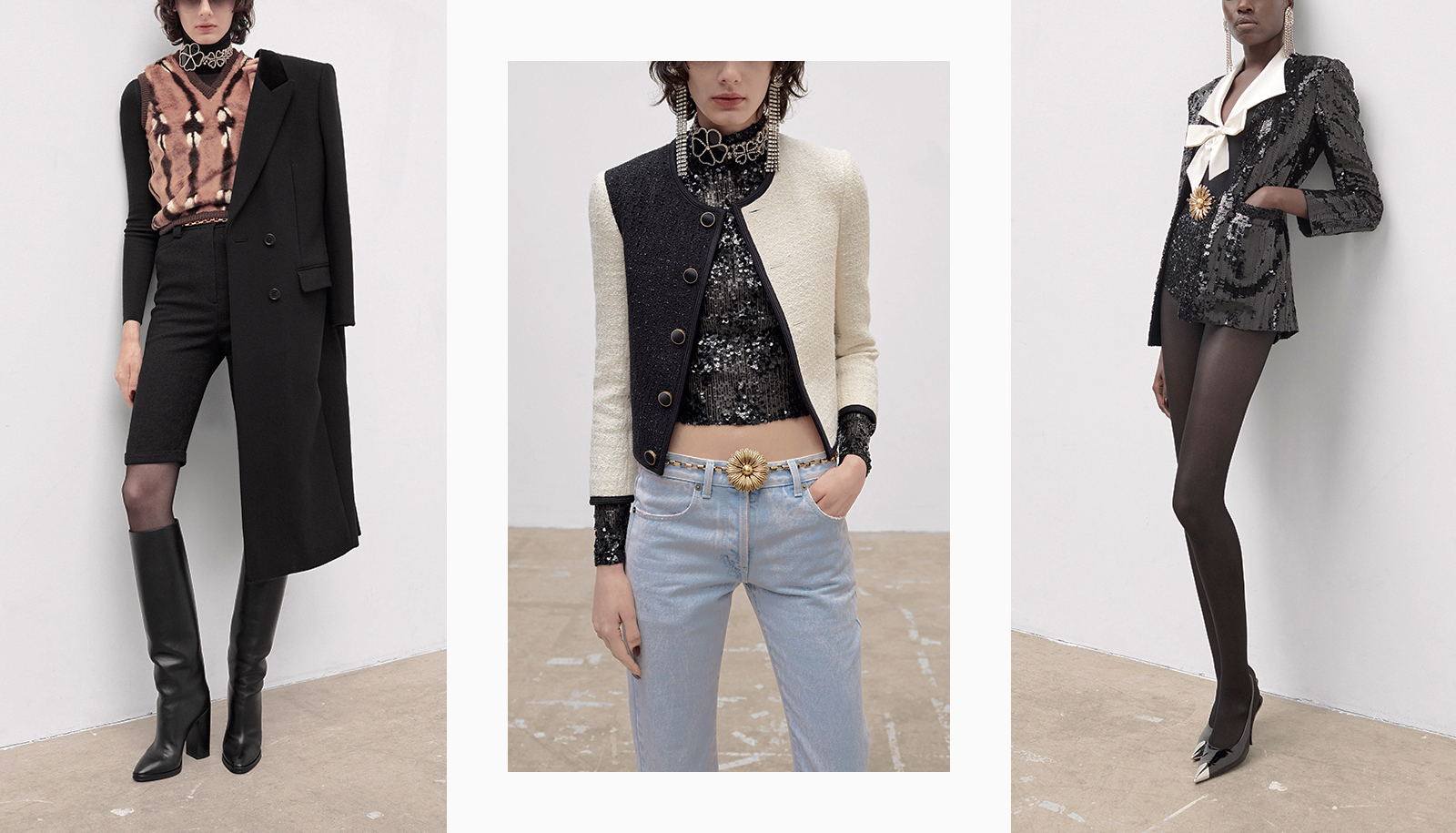 Le Smoking: When it was introduced in 1966, Le Smoking was deemed scandalous—women in a tuxedo? Quelle horreur! It was unlike anything anyone had ever seen. Arguably Saint Laurent’s most iconic piece, this sharply tailored suit maintained the codes of the classic men’s tuxedo, while also accentuating the female silhouette.

Criticized by the fashion press, it was first worn by celebrities such as Catherine Deneuve and Bianca Jagger, and a success amongst the label’s younger clientele who purchased the ready-to-wear version at the Rive Gauche boutique.

The safari jacket: Inspired by the uniforms worn by Western men in Africa, Saint Laurent transformed a utilitarian, functional piece into a fashion staple for women. Introduced in 1968, this beige cotton jacket was belted at the waist and featured four large patch pockets. The safari jacket quickly became one of Saint Laurent’s signature pieces, and is still present in the brand’s collections today.

Shop Saint Laurent on italist and save up to 40% off local prices!

We offer a large selection of Saint Laurent clothing, shoes, and bags for women and men. 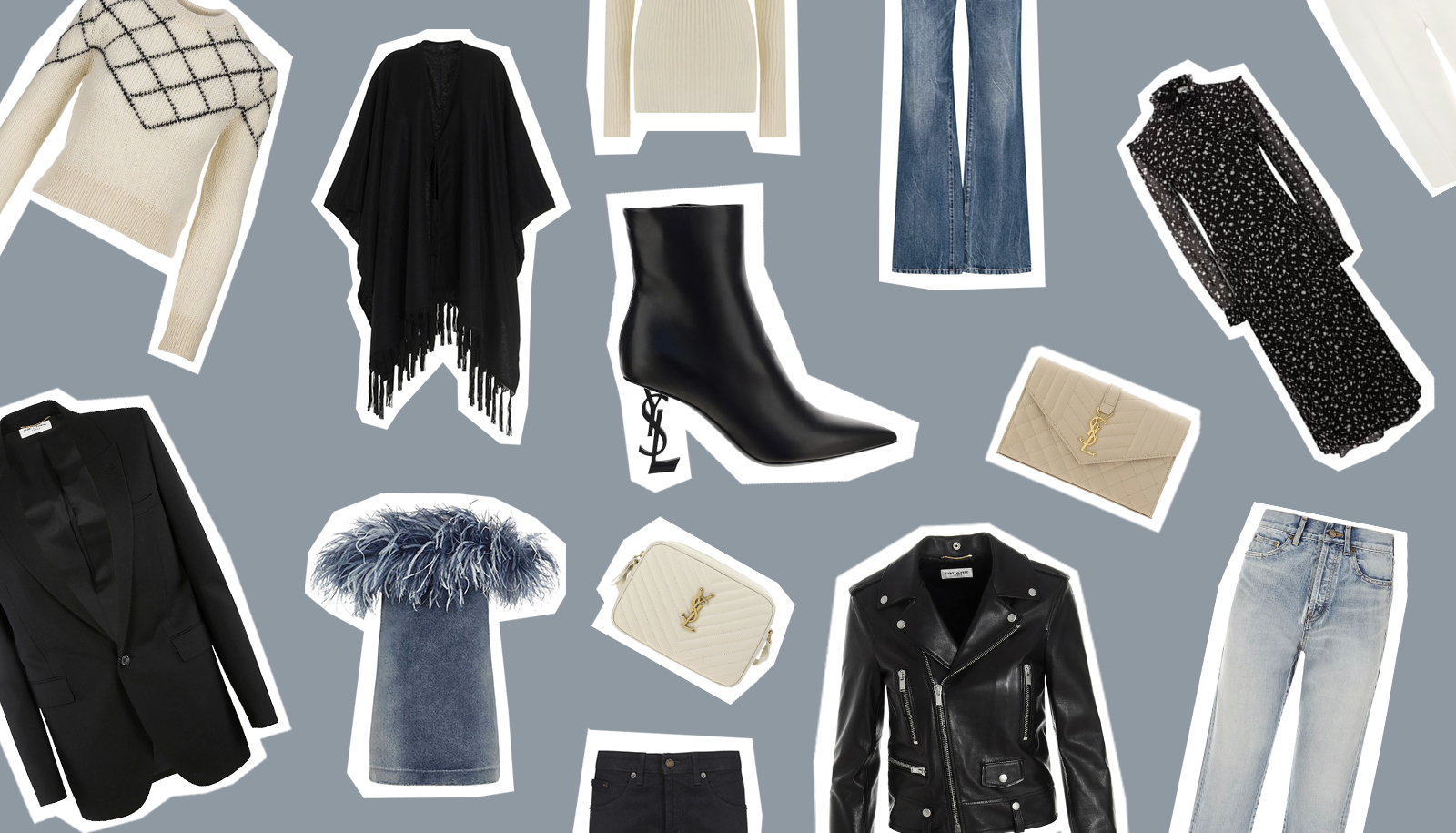 Should you invest in a pair of Brunello Cucinelli shoes? (Yes)

​​Everything you need to know about Fendi